Kenny here. It’s been almost 7 years since my last post and a lot has changed about me and China since then. I’m nearly 20 years old now and am about to begin my sophomore year of college. Having just concluded a 3 week coaching and education program in the Mekong Delta of Vietnam, I decided to spend some time in Hong Kong and Beijing on my way back.

I caught a 5 am flight out of Saigon to Hong Kong and arrived a few hours before the airport closed (due to the current on going protests). I stayed with my mother’s old Fulbright overseer Nathan who has since moved to Hong Kong. Nathan was kind enough to host me for my first two nights. He was also very generous in showing me around. Together we explored Hong Kong and went on many night hikes. Photos below: 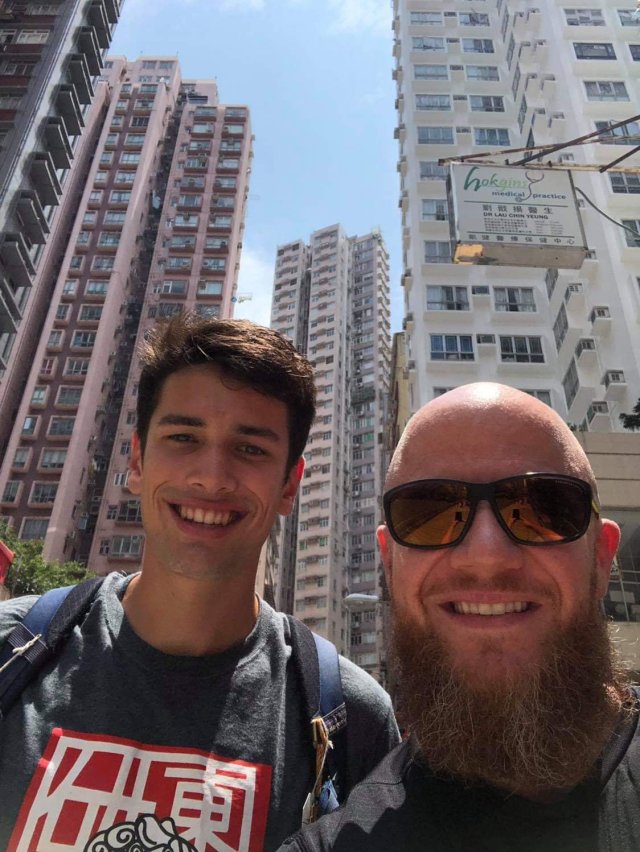 Next I explored Hong Kong on my own going Buddhist temple hoping and stand up paddling along Stanley beach. I then met my mom’s former student Jennifer for dinner. It was great to catch up with her and together we had dim sum highlighted by fried pigeon and a flaming pineapple! 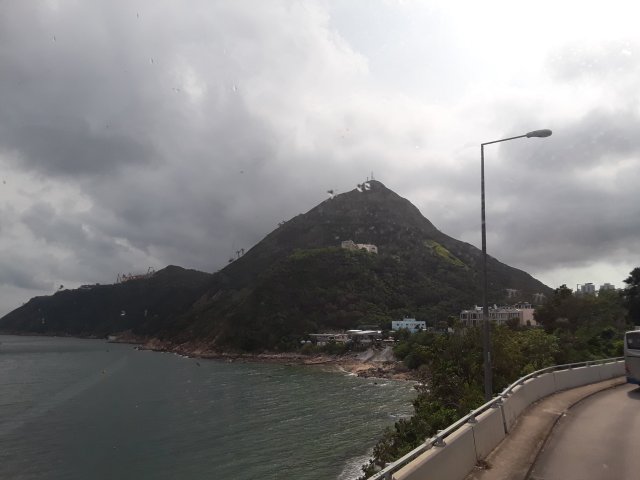 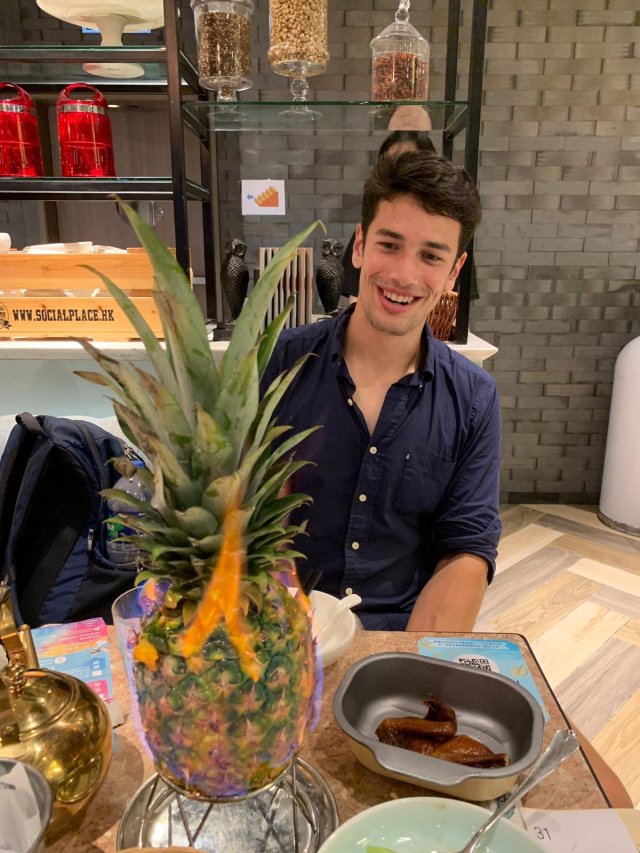 Next up on to Beijing! 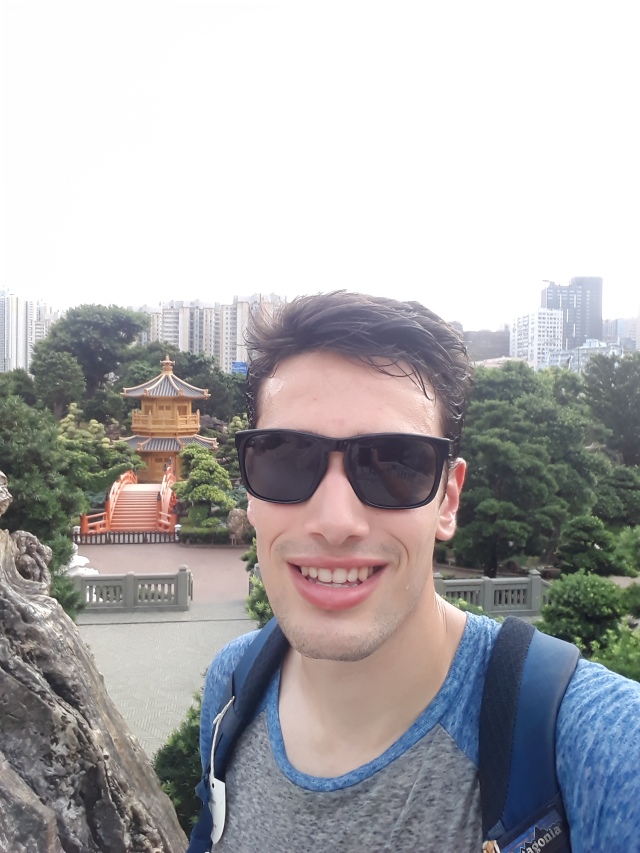 After a six year break a Coplan is back in China. I, Kenny Coplan, will document my time in Hong Kong, Qinhuangdao, and Beijing over the next few days!!! I recently finished a program in Vietnam working with kids in the Mekong Delta to promote higher education through sport. On my way back to the US I decided to stop in China.Enjoy!!

GENGHIS KHAN AND THE QUEST FOR GOD: How the World’s Greatest Conqueror Gave Us Religious Freedom by Jack Weatherford completely revises our concept of Genghis Khan. Outside Mongolia (where he is venerated), he’s viewed as murderous, merciless, a monstrously insane warrior king who conquered the largest empire in history.

But Weatherford – a bestselling Macalester College anthropologist – finds Khan was a key influence on Thomas Jefferson and American religious freedom. Here is Simon Winchester (one of David’s favorite writers on China) in a book review last month:

“Though godless himself, [Genghis Khan] favored total religious freedom for his subjugated millions, of many different faiths…[who should] ‘live together in a cohesive society under one government.’ …The Great Khan’s ecumenism has as its legacy the very same rigid separation of church and state that underpins no less than the American idea itself. The U.S. Constitution’s First Amendment is, at its root, an originally Mongol notion…Many might think this eccentric in the extreme, until we learn that a runaway 18th-century best seller in the American colonies was in fact a history of “Genghizcan the Great,” by a Frenchman, Pétis de la Croix, and that it was a book devoured by both Benjamin Franklin and Thomas Jefferson.”

We’ve written here about Chinese (Inner) Mongolia (2012, the time of these photos). The haunting music, devastating impact of mining, the demeaning commercial imagery. 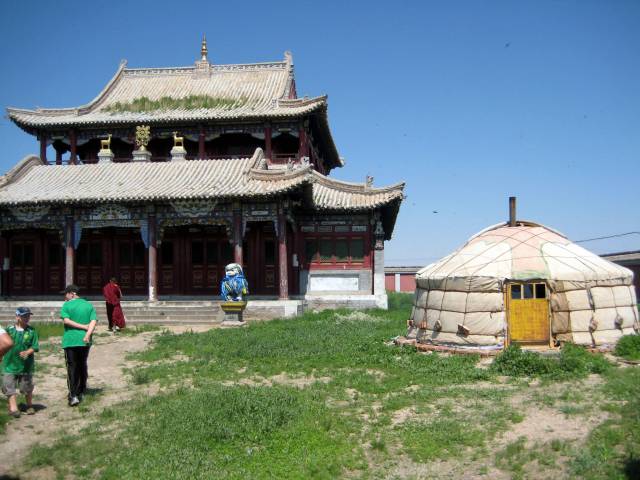 The author Weatherford, a hero in Mongolia, lives there half the year with his wife, who is apparently quite paralyzed by MS. I was touched, in an interview he gave, his description of how she is received there:

“In Mongolia there are no special facilities for disabled people; the streets and sidewalks are a jumble of broken cement and open holes. Yet when we step out of our building, hands always appear. No one says, “May I help you?” They simply do it and disappear, expecting no thanks. I never have to ask for help. Every week a few musicians come by to play the horse-head fiddle and sing for Walker, in the belief that music is the best medicine. Pop singers and hip-hop groups have come for the same purpose, saying that it will keep our home warm. People from all over the countryside send us dairy products. Our kitchen is usually full of yogurt, hard cream, curds, mare’s milk, mutton, horse ribs, and wild berries. Lamas, shamans, and healers come by to offer prayers, incense, herbal teas, chants, massage, and other forms of traditional treatments. Even strangers send camel wool or cashmere blankets, shawls, and socks to keep Walker warm. Mongolia has welcomed us with a care and warmth I can scarcely comprehend.” 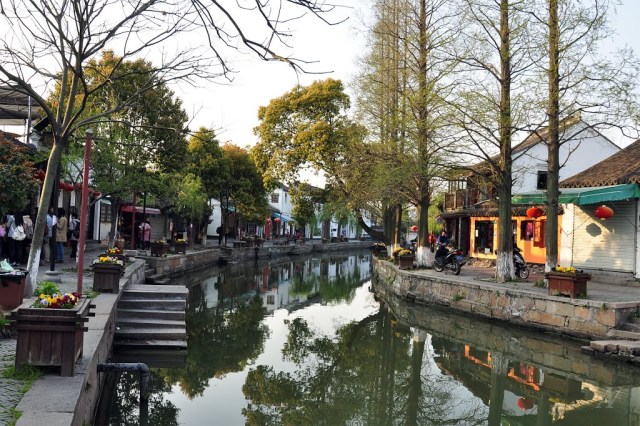 It incorporates monks’ normal evening chants (at a monastery on the opposite riverbank) and musicians splashing in the canal water. It’s in ‘water village’ Zhujiajiao (photo above), one of the canal- and riverside towns on the outskirts of near Shanghai, along the Qingpu River’s path to the sea–insanely beautiful, well-preserved, highly touristed, miraculously intact.

The space began as a Ming-era house. Add a “lower story reminiscent of an industrial space fashioned after German Bauhaus style… The stage is partly submerged in water, and as musicians rock their bodies and move their feet while they play, the sound of splashing water becomes part of the performance” (Shanghai Daily.com ). The river itself flows into, through, and out of the hall, which becomes another instrument.

“The combination of the Chinese Ming house and German Bauhaus styles, as well as the contrasting sounds of water, iron and other natural elements, completes my architectural music wonderland,” Tan told Shanghai Daily reporter Zhang Qian.

“My ultimate goal for Water Heavens,” he said of the piece, which has scheduled an open-ended run, “is to create a space where music can be seen and the architecture can be heard.”

(The architects were from Japan’s Isozaki Studio, with offices in Beijing and Barcelona.)

Dazzled by a Shanghai Quartet concert, A Night in Ancient and New China — more about what that means in a sec. Proud it’s our “quartet-in-residence” at Montclair State, the university down the block. (“Resident” artists in Beijing and Shanghai too…OK, we’ll share.)

Their playing gets called “pitiless,” “ferocious,” “charged,” “aggressive.” We heard the intense premiere of a new “Raise the Red Lantern“(1991)  film score (trailer here; it’s got everything: historic setting, sex and violence, Gong Li) revised by the composer Zhao Jiping’s son. (The father also scored “Farewell My Concubine.”) That was China new. Ancient: traditional folk pieces featuring pippa (lute) virtuoso Wu Man, pictured at top — two members knew her, as children in a Beijing music boarding school. She played Kazakh folk tunes, apparently popular in the ’60s; ancient Central Asian nomads are believed to be the original source of the pippa. You hear hoof beats, feel the openness of the steppe, as in Mongolian folk music (China’s bluegrass — having its moment when we lived in Beijing).

The Shanghai Quartet cross genres and geographies. My favorite piece was a shamanistic Tan Dun composition, “Ghost Opera (Chamber Version)” — more on Tan (his latest work puts musicians knee-deep in an ancient canal) soon. Meantime, have a listen or a watch: 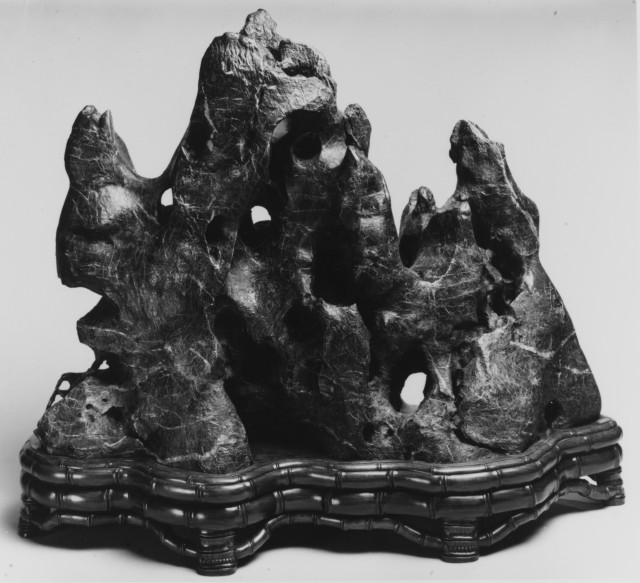 We saw “Museum of Stones” at NY’s Noguchi Museum, a vast survey of elements, mass, earth, flights of cosmic abstraction — weirdly, since solid rock seems at odds with airy thinking. Not so. Not to Noguchi, seminal modernist sculptor, not for the collectors of scholar’s stones, on loan from the Metropolitan Museum. Where “rock and water rub up against each other, in a river gorge, along a coast…Rock is the sculptor and water is the material. Expand the timeline a bit, however, and the relationship reverses; water becomes the sculptor and rock the material” (said the exhibition catalog).

The traditional Chinese veneration of these pocked rocks always mystified me, at temples, palaces, gardens (below, Shanghai’s famed classical Yu Garden, Yuyuan). Hollowed-out, craggy — unlike Kyoto’s smooth rock and sand gardens, these stones are furrowed, wrinkled, honeycombed, twisting. What I found ugly is exactly why they’re valuable. Only now do I understand why. 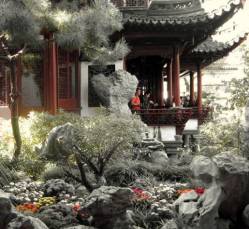 China’s literati collected Scholars’ Stones, gongshi (gong=spirit; shi=rock) for thousands of years. First in gardens; then Taoist monks wanted them inside for meditation and inspiration, small enough to put in their studies. They loved those that resembled mythical creatures, actual beings, or “the magical peaks and subterranean paradises (grotto-heavens) believed to be inhabited by the immortals,” the Met explains. The immortals — the many gods of the Taoist pantheon — live in the holes. Stones may also resemble earthly islands, caves, mountain landscapes. They appear in so many classical paintings, and millennia ago, in Tang dynasty (618-907) poems.

I should add that some got drilled, improved a bit, to evoke more. They’re “Rorschach blots in three dimensions,” a Times critic wrote. “In the blink of an eye they move from abstract to representational, conjuring a great deal of Western sculpture as they go…. One thinks of Rodin, Giacometti, Henry Moore, Dubuffet, de Kooning … Michaelangelo.”

The best are perforated, full of emptiness, “worlds within worlds” (as the Asia Society titled a past scholar’s stone exhibition). In them you find creation, time, nature’s forces. The underlying concept emerges from Taoism. Pu — ‘the uncarved block,’ i.e. the power of the thing in its simple, natural state. These are thing and metaphor at once. As Artist John Mendelsohn wrote about scholar’s stones, “Nature made art in its own image, an eccentrically evocative fractal of itself… for tabletop contemplation of the universe.” 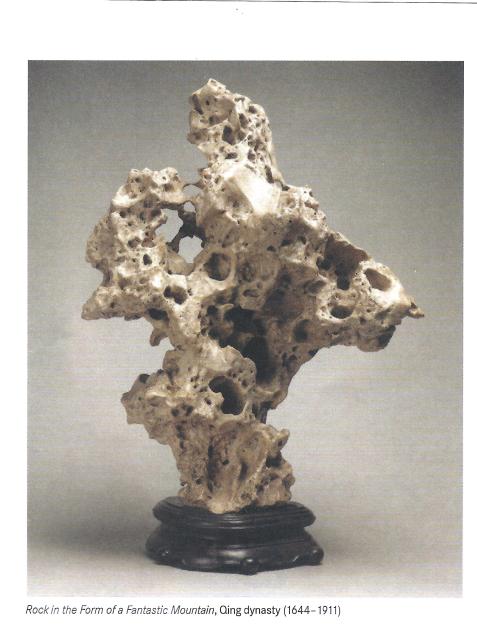 Now I get it. Stones. Battle (David and Goliath). Danger (Scylla and Charybdis). The grab at eternity — how our tomb stones and memorials, as the catalog says, “try to deny the insignificance of a biological lifespan on a geologic timescale.” 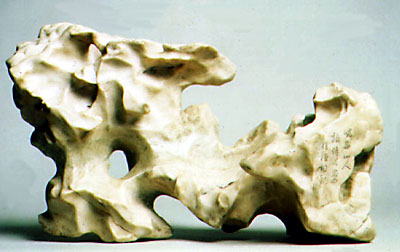 The Year of the Monkey begins in 11 days. I’ve been thinking about Angel Island, San Francisco Bay. Our kids study U.S. social history, reform and rights struggles, but not yet the Chinese-American story. America detained 500,000 immigrants on Angel Island, about half from China, 1910 to 1940, during the Chinese Exclusion Act . Some were solo children under 10. They were interrogated, inspected, often deported. A woman detainee without her husband saw her baby die, and was refused release to attend the baby’s funeral. A graphic novel tells these stories: Angel Island: The Chinese-American Experience, recently released by Stanford (buy one).

Detainees who’d fled famine and the fury of armies local and foreign (sound familiar?) carved hundreds of poems on Angel Island barrack walls. A park ranger discovered them in 1970. 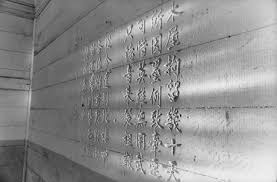 This is a message to those who live here not
to worry excessively.
Instead, you must cast your idle worries to
the flowing stream.
Experiencing a little ordeal is not hardship.
Napoleon was once a prisoner on an island.

The sea-scape resembles lichen twisting
and turning for a thousand li.’
There is no shore to land and it is
difficult to walk.
With a gentle breeze I arrived at the city
thinking all would be so.
At ease, how was one to know he was to
live in a wooden building?

In the quiet of night, I heard, faintly, the whistling of wind.
The forms and shadows saddened me; upon
seeing the landscape, I composed a poem.
The floating clouds, the fog, darken the sky.
The moon shines faintly as the insects chirp.
Grief and bitterness entwined are heaven sent.
The sad person sits alone, leaning by a window.

America has power, but not justice.
In prison, we were victimized as if we were guilty.
Given no opportunity to explain, it was really brutal.
I bow my head in reflection but there is
nothing I can do

Happy Year of the Monkey.