Thirty women, China’s best embroiderers, in Nanjing, worked for one year to embroider the richly brocaded upholstery. Papermakers, working with a traditional and especially tough pulp from the mulberry tree, recreated the paper strong enough to support the Italian trompe l’oeil ceiling painting, from their papermaking studio in rural Anhui. Bamboo craft masters, recruited after a national search, prepared inner skin bamboo carving and bamboo thread marquetry with their grandparents’ tools. During the Cultural Revolution, many of these craftsmen’s parents, or grandparents, had their tools smashed. Some buried them and they survived. Many tools had been handed down for generations.

They chosen to were repair the emperor’s secret garden, Juanqinzhai. (The book🙂

I learned about the project from a lovely documentary, The Emperor’s Secret Garden (by Mandy Chang and Zhou Bing, 2010, BSkyB Masterpiece productions). The Qianlong Emperor, who ruled around the American Revolution, was the richest and most powerful man on earth. As a highly cultured man, Qianlong wrote calligraphy, and we actually saw his handiwork on auction in NY a few months ago:

My son and I pretending we could afford Sotheby’s Chinese calligraphy on auction, NYC, Spring 2014. A few of Qianlong’s panels were set to fetch half a million dollars.

Qianlong, already living in earth’s largest palace, having sucked (as emperors do) the continent’s wealth, commissioned a secret garden where he envisioned retreating for a fashionable, scholar-monk-style retirement: 27 buildings, grottos and rockeries, a garden, and interiors of textile, friezes and woodwork, silk brocade so delicate it’s transparent, woven on looms 2 storeys high; a level of craftsmanship that blows the mind. Somehow, the retreat was locked up, and discovered dusty and crumbling in the early 2000s. It had been undisturbed since the 1700s. As WMF explains, it sparked one of the most awe-inspiring international  restoration projects ever.

From the World Monuments Fund slideshow on the project: A painting of the garden complex itself, and of one mural, of the royal family: 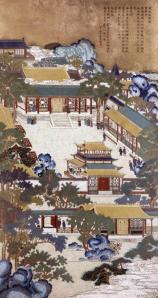 The work was part of Forbidden City’s first international collaboration — and China’s first large-scale interior conservation project. The effort became a lab, and a classroom for training a young generation of Chinese conservators. But first, restoring the emperor’s secret garden required searching for what had  nearly disappeared: highly skilled traditional craftsmen and women.

Together with architects, engineers, scientists, archaeologists and curators, conservators and conservation scientists, helped by the World Monuments Fund, the hideaway was restored. Cultural heritage was strengthened. Traditional craftspeople fired up their shops. And the prestigious Tsinghua University in Beijing created, through Jinqinzhai, China’s first degree program in interior conservation. Which means preservation according to international standards, can begin to take hold here.

To see, as we have, the scale of destruction (even to this day) of the treasures scattered across mainland China is to understand what a huge big deal it is. The project also forged new levels of cooperation and trust between U.S. and China preservationists, a positive part of this emerging, fraught relationship. I expect it won’t be the last: Large sections of the Forbidden City are still in disrepair.

If you’re in China, you can go and visit, though the rooms open only part of the time.