It incorporates monks’ normal evening chants (at a monastery on the opposite riverbank) and musicians splashing in the canal water. It’s in ‘water village’ Zhujiajiao (photo above), one of the canal- and riverside towns on the outskirts of near Shanghai, along the Qingpu River’s path to the sea–insanely beautiful, well-preserved, highly touristed, miraculously intact.

The space began as a Ming-era house. Add a “lower story reminiscent of an industrial space fashioned after German Bauhaus style… The stage is partly submerged in water, and as musicians rock their bodies and move their feet while they play, the sound of splashing water becomes part of the performance” (Shanghai Daily.com ). The river itself flows into, through, and out of the hall, which becomes another instrument.

“The combination of the Chinese Ming house and German Bauhaus styles, as well as the contrasting sounds of water, iron and other natural elements, completes my architectural music wonderland,” Tan told Shanghai Daily reporter Zhang Qian.

“My ultimate goal for Water Heavens,” he said of the piece, which has scheduled an open-ended run, “is to create a space where music can be seen and the architecture can be heard.”

(The architects were from Japan’s Isozaki Studio, with offices in Beijing and Barcelona.)

Year of the Tiger by Allison Lloyd

Before we went to China, we started purchasing books to read (& to bring, English kids’ books are hard to find — and if you can, they’re expensive in China). I’ve wanted to share this list for a long time.

All the Way to Lhasa A tale from Tibet by Barbara Helen Berger. We enjoy this.

The Magic Horse of Han Gan by Chen Jiang Hong. An animal tires of war. A favorite.

The Terrible Nung Gwama A Chinese folktale adapted by Ed Young from the retelling by Leslie Bonnet Ill Ed Young.

A Jewish Girl in Shanghai, a graphic novel (& an animated film)

A Jewish Girl in Shanghai by Wu Lin We got this graphic novel in China, at the synagogue-museum in Shanghai. (Speakign of graphic novels: highly recommend the award-winning American-Born Chinese, which takes place in America; we read it later). A great book.

Shen and the Treasure Fleet  Ray Conlogue. Kind of slow.

Year of the Tiger  by Alison Lloyd– historical adventure like Percy Jackson. Really loved this. I actually would call this middle-grades.

Dragon Horse  Peter Ward, 10th century China fantasy & adventure, catalog compares to Eragon. We found it slow and decided not to continue. Too many time, place- and flashbacks to ancient times, or myth, too soon.

Revolution Is Not a Dinner Party  Ying Chang Compestine, modern young adult set in 1972, teen & Maoism, Cultural Revolution. Everythign I said above. Hard to put down.

The Tao of Pooh is good for older kids, not just adults

The Tao of Pooh by Benjamin Hoff: both kids (middle grades) read it & really enjoyed it. Very simply written even though it’s an adult book on a complex topic. 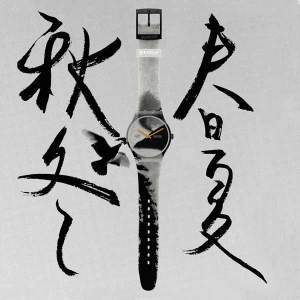 The artists behind it are Ji Weiyu and Song Tao, a duo of photographers who call themselves Birdhead. According to Asiarctic, a website about contemporary art in Asia, they’re 33 years old, Shanghai-born and based, and concern themselves with the city, the urban environment.

“The design arises from Birdhead’s ongoing preoccupation with the medium of photography and the various ways in which photographic processes can explore and document the passing of time,” according to Swatch’s promotion.

I’d never “lectured”–teaching doesn’t count. Fulbright requires it, to spread widely whatever we know. I’m on a tear while David (through April) covers at home. When not traveling or teaching my own 60 students–grading-arm cramp!!–I just sleep. (Or watch Breaking Bad, our post-Downton Abbey obsession.)

I’m grateful for the challenge: Figuring out what I could offer a given group, & packaging it right. In Urumqi, the far-western capital of Xinjiang province (of Turkic, and other minorities, bordering Kyrgyzstan, Tajikistan, Pakistan, Kazakhstan), I talked to a College of Foreign Languages that doesn’t have one native English speaker on faculty. I also lectured to ed majors there–future English teachers. The ad was a crazy big 10-foot billboard!

The hall of 250 filled. It was optional, so apparently they value the topics, communicating better in written and spoken English (with lots of Q&A). I also donated journalism books, in a nice ceremony. Shipped by the State Department, donated by New York friends in publishing. English journalism textbooks are impossible to come by here. Too subversive. 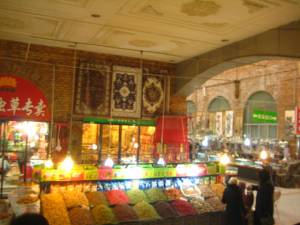 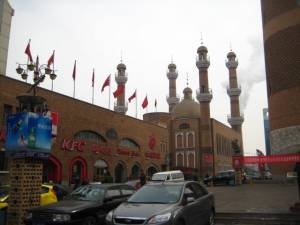 It’s a huge blessing reaching people who want, need what we have to give. And of course getting, in return, the connection — “Only connect” — across culture, language, the globe, and the rising, angry superpower-rival ignorance and blind prejudice (See: Mike Daisey). (Had we a basic level of respect, understanding, accurate information, our many legitimate human-rights criticisms would have far more power and credibility.)

Another lecture was at Shanghai’s University of Finance & Economics, for all their economic journalism MA students. Lecturing is an intensely focused few hours, almost performative. Afterwards we take pictures. 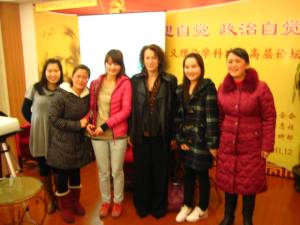 I really appreciate what journalism gives us–at the intersection of news, economics, the digital revolution, language, communication. My Shanghai talks were ‘Future of News,’ and ‘Why Business Journalists Missed the Financial Crisis.’ Yeah — 20/20 hindsight, shooting ducks in a barrel. Still, juicy.

David came. It was a whirlwind day and a half. 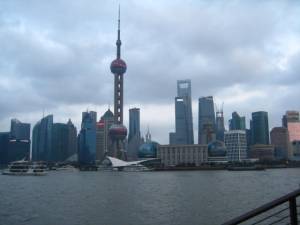 Coming next: lectures in coastal Qingdao (of beer fame–Germany’s old concession), Guangzhao (1.5 hours from Hong Kong; I’ll bring the boys), and possibly elsewhere. Fulbright organizes many invitations.
I’m also guest lecturing around Beijing’s universities, and at the embassy’s cultural/education office (the Beijing American Center–the nice tables below). Last night: For scholars hoping to get into U.S. grad schools, on writing their personal statements (a foreign concept here!). The next will be better English writing for Chinese businesspeople. Huge demand.

Back at my own university, we’ve begun (nearly) weekly class lunches at the faculty canteen, where I can host a banquet for 10 for about $30. Another time for sharing, interaction, in an informal setting to break through their classroom shyness. Knowing I love and miss my garden, they gave me a teeny potted plant seedling — one delicate stem with 3 tiny leaves.

A good metaphor for our relationship, we Chinese and Americans.