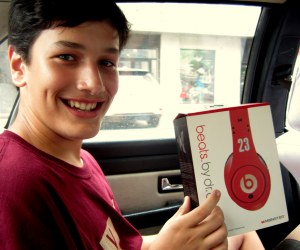 There is no photo of ‘Mr. Wong.’ Not his real name.

He does have a business card (black). Black card, black market.

His stall in Qingdao‘s largest indoor flea market sells counterfeit electronics. China, yes it’s true, is home to rampant illegal trade in counterfeit goods. Violating copyright is illegal & I’m totally against it. But — yes. My son bought some fake beats by Dr. Dre headphones in China. They retail in the U.S. for $250. Worn around the neck, I am told, beats are the ultimate (middle school) status symbol.

He ships to America, he says.

He sells without U.S.-to-China customs fees/import tax: they come from Canada, he says. Uh, that makes sense… (?)

My Qingdao business students wrote, one night this summer, on “Will China move from copycat to global high-tech power” and if so, when and how? We discussed a new ebook, excerpted here (“Beta China: The Dawn of an Innovation Generation,” by Hamish McKenzie, a PandoDaily contributor). McKenzie is very optimistic about China’s emerging high-tech future, citing the success of (cult) mobile handset maker Xiaomi, which makes China’s homegrown answer to the iPhone and is run by 43-year-old Lei Jun, called “China’s Steve Jobs.”

Students’ consensus: China is great. So it will get beyond copycat to real tech leaership. But first, they wrote, education has to change, to nurture creativity rather than memorization. And some wrote, too, that financing (start-up funding) and legal mechanisms (copyright protection) — basic manufacturing infrastructure — must mature, to fund and protect inventors.

The students all seemed to conclude that there’s reason for optimism, but China also has a long way to go.