Our campus (China University of Petroleum, Qingdao) is only about 3 or 4 years old at this location. Some of the buildings are cold, but surprising and dramatic. We didn’t seek out interesting new buildings; they’re everywhere. Train stations, universities, are part of the economy-stimulating infrastructure-building boom that’s both kept China’s economy kicking through the global slowdown, and — now — threatens to take it down as all the  (bad, or corrupt, or ill-considered) loans and spending comes home to roost.

We passed this each day on campus. 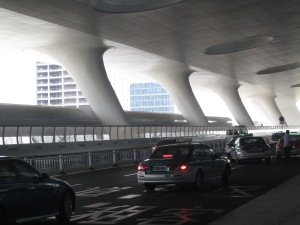 Train stations — this one in Hangzhou — are Hollywood-futuristic. They’e moving millions of people so it’s not surprising they have 10 escalators, not 2 or 4. Many we saw had 8, standard. It makes sense, but still looks daunting, futuristic & impressive. The driveway taking cabs to the Hangzhou station just is as we (’70s kids) once imagined the future.

Right, note the huge lotus sculpture in a massive (Soviet-big) plaza in Jinan, largest city and transport hub of Shandong — the province home to the most Party leaders at the national level. Left, we randomly passed this on the streets of Nanjing — the public library.

If only the book collection inside was as expansive as the open-to-the-sky design.